Header image: “Control is an Option to Command” by Frederico Cintra. CC BY.I don’t think it’s much a secret that I love Twitter.

But, recently, Twitter has also become a massive source of stress for me and I had to figure out some ways to manage it.

Sure, I could stop using it entirely–and I do unplug on some weekends–but a huge part of my social circle is on Twitter, especially when it comes to genre fiction. So to leave Twitter entirely would be to cut myself off from my community–which also isn’t good for me!

So I hit on a few solutions that I thought might be helpful for other people out there in similar positions as mine. I’ll note that these suggestions do require authorizing outside services to manage aspects of your account and not everyone may be as comfortable with that as I am.

Turn Off Email and Push Notifications

If you haven’t already, turn off all email notifications. Then turn off all push notifications on your phone except for DMs. Seriously, this is amazing, because it lets you choose when you’re interacting with Twitter as opposed to being constantly pinged. If my phone doesn’t beep every time someone mentions me or retweets something I’ve said, I’m able to ignore it for long stretches so I can get work done. And I am almost always working.

Use a Client, Not the Webpage

Use a client–like Tweetdeck–instead of the webpage. This is critical on several fronts.  First, because Twitter keeps fucking with how conversations flow and whose tweets you see.  Using a client mitigates some of that nonsense. And, with a client, you can configure exactly what each column displayed and which information you see in each of the columns.  So, for instance, in my “Notifications” column, I have it configured as thus: 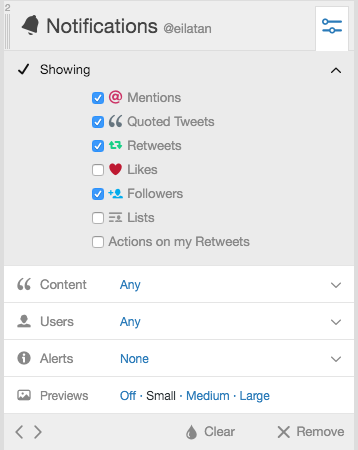 Depending on what’s going on in my notifications, I may turn off Quoted Tweets and Retweets–the day my Alan Rickman GIF went semi-viral, I had to do this because I literally couldn’t see anything else happening. I have the Lists notifications turned of because every so often some jackhole will decide to add me to a hilariously named list intended to insult me.

You can also use Hootsuite for this sort of thing, but Hootsuite has a lot of bells and whistles and to me it feels like bringing a flamethrower to a knife fight. But it may work better for you than Tweetdeck! And as Twitter owns Tweetdeck, I expect some sort of fuckery to happen to it eventually.

Block Bots Will Save Your Sanity and So Will Mute

The next thing I did was sign up with a couple of blocking services, BlockBot and Block Together.

The main problem with BlockBot, in my opinion, is the user curation of the block lists: I’ve seen people known to be bad actors offer to add people to the lists on BlockBot in a retributive manner. You can always unblock people manually and it won’t block anyone you follow, but it still seems like a hole in the process.

Block Together applies some rules to accounts on Twitter: it blocks new accounts that mention you and accounts with fewer than 15 followers that mention you. This helps to mitigate a lot of sock puppetry. You can also share your block list with friends–this functionality is also available directly in Twitter, too.

As of this writing, I am blocking over 13,000 users between these two tools and folks I’ve blocked on my own. I make liberal and free use of the block button and the mute function–I mute hashtags or keywords on a regular basis and I also review those mutes to make sure they’re still valid on a periodic basis.

The final thing I have done is make use of lists. They’re all private (except for my silly list of Hulks), and I move between them depending on my stress levels on a given day. Basically, I have replaced the “Home” column in Tweetdeck with a list. I did have to switch to Tweetbot on my phone for this strategy to work, as the default Twitter app doesn’t do list display in a way that I find useful–it’s not accessible from the main screen, it’s buried under settings.

I find it easier to use a service like Twitlistmanager to create and populate my lists since this doesn’t seem to be a functionality that Twitter is interested in making easier to use. Which is very frustrating.

Using lists has made Twitter into less of a firehose for me and it’s much less stressful for me. People who aren’t on the current list can still see my tweets and I am happy to interact with them in my mentions–and I do review the lists every so often to add or remove people. This really isn’t about anyone I’m following, it’s about me.

Finally, what works for me may not work for you! I thought it would be useful for people to have an idea of different strategies that can be used to better manage theit Twitter experience. Despite what some people think, you are under absolutely no obligation to listen to everyone who wants to barge into your mentions and I’ve found that combining these four things together has made Twitter more fun for me to use.